With Aston Villa’s academy overhaul in full swing, highly-rated youngster Kaine Kesler has put pen to paper on his first professional contract at the club.

After standing out in Villa’s U18 side, the 17-year-old full-back will be promoted to Mark Delaney’s U23 group to fast-track his development.

Seven teenage prospects including Louie Barry, Jadon Philogene-Bidace, Carney Chukwuemeka and Myles Sohna had all penned new deals at Villa Park before the club tied down Kesler to his first pro deal.

Villa’s CEO, Christian Purslow and newly appointed Sporting Director, Johan Lange have been busy headhunting talent from across Europe to build a formidable looking academy, but Kesler, who has worked his way through youth sides at Bodymoor Heath will be one of a few home-grown talents in Villa’s U23 side next season.

Speaking at the Villa Supporters Trust’s AGM in January, Purslow said: “Frankly, I’m going to be brutal, 22-year-olds playing in an under-23 team means your system isn’t working.

“It means your system has failed because 22-year-old footballers at Aston Villa need to be in the first team. The ultimate goal is to populate the under-23 team with 11 outstanding 16, 17 and 18-year-olds, then I will know it’s working.

Villa have been populating their youth sides with the player profiles Purslow and Academy Manager, Mark Harrison desire.

Lange’s and Rob Mackenzie’s recent appointments have also bolstered Villa’s recruitment possibilities as the club tries to identify and lure Europe’s best, young talent to B6 – and the signings of Kesler, Chukwuemeka, Philogene-Bidace and Barry go someway in reaffirming their ambitious plans.

Kesler revealed via his Instagram account that he was pleased to sign a new deal at Villa. He said: “Happy to have signed my professional contract with Aston Villa.”

The versatile defender has even been spotted travelling to games with Villa’s first team and the promising youth player is only one of many Villa youngsters hoping to break into the first team in the not too distant future.

Dean Smith’s first team are stepping up their preparations for the 2020-21 Premier League campaign after returning from a pre-season training camp in Wales. Kesler, along with a host of other young hopefuls impressed in Wales, though it’s unlikely that they will see any first team action next season.

Kesler did however play 60 minutes for an Aston Villa XI against Bristol City recently, and clearly his development is not going unnoticed amongst first team staff.

The four points we will look at in this analysis all influence Kesler’s overall game, and so we will look at each one in a specific order. Firstly, we will analyse his athleticism and pace.

Kesler’s first notable asset as a modern full-back is his rapid speed. As tactics develop and the offensive phases of a game become all the more important, a player’s speed is becoming more of a requirement rather than purely an additional strength to a full-backs game. Though, it must be noted that Kesler’s ability to operate down the flanks with exceptional speed can be a huge plus to Villa’s U23 side in both attacking and defensive capacities.

This idea is explained below.

As Villa’s midfielder picks the ball up with limited passing options in front of him, Kesler is already breaking stride to accelerate into the vacant space on the right wing. He is an outlet for Villa’s young side with a rate of speed that is extremely difficult to contain.

His attacking instincts are obvious and when Southampton, as evidenced here, are applying a low block, his movement is crucial. Kesler isn’t looking to receive the ball to feet and instead, he understands that with a well-weighted pass into his stride, he can impact the game from an advanced area even if his role in the team is to first and foremost protect the wings with his defensive qualities.

Kesler takes the ball down with an effective first touch after making up the space afforded behind the Southampton left winger. The young full-back makes up ten yards quicker than his opposing marker which again demonstrates his rapid acceleration to move into space and become an effective outlet for Villa’s academy teams.

While his ability to move from ‘A to B’ in most games is generally unmatched, his physical maturity for a footballer of his age is impressive. Below, we can see how he is powerful enough to climb above taller strikers to dominate aerial duels. 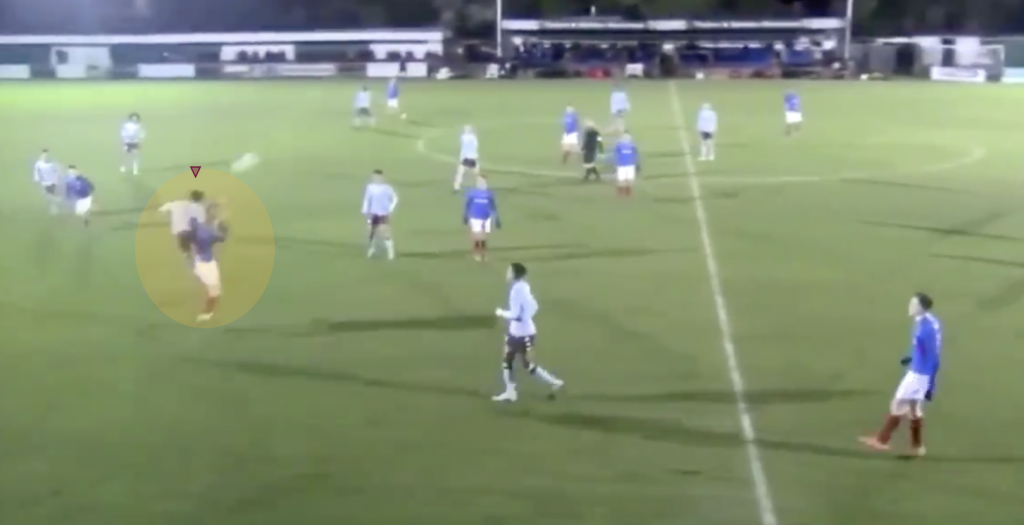 Marking Portsmouth’s tallest forward poses many challenges but Kesler doesn’t let his shorter starting height prohibit him from winning a header under challenge from a player more accustomed to aerial duels throughout a game. Kesler is clearly an athletic youngster, but making an impact on the game by asserting his physical dominance is another advantage altogether.
Explosive strength is an important asset for any young player whose development is set to be fast-tracked through academy levels. Kesler’s physical capabilities are evident in U18 performances, and such full-back fundamentals can be as much an offensive or defensive tool as Villa’s U23s gear up for an important 2020-21 season.

A composed and technically astute full-back

Kesler’s game is largely centred around his athletic efficiencies, but the technicalities that he demonstrated throughout his time with Villa’s U18 side proves to show why club officials were keen on handing out a new contract.

In this frame, we can see how Kesler’s awareness to turn opposing markers can benefit Villa’s U23 side.

Facing towards goal, Kesler’s immediate vision is one surrounded by Portsmouth shirts apart from goalkeeper Viljami Sinisalo, acting as his only passing option. Though Kesler is confident in his own ability to turn a player and set Villa away from tight spaces on the wing, in his own defensive third.

Having the technical ability and agility to turn a defensive phase into an attacking phase is a major asset to Kesler’s quickly developing game. Many full-backs of his age have the ability to beat players and offload the ball with accuracy, but having the nous to set traps and get out of them time after time is a cause for real optimism as Kesler moves into U23s football.

After taking two Portsmouth markers out of the game, Kesler can dribble at the heart of the midfield, where after already beating a couple of players, he has the choice of passing the ball in-field or out wide to centre-back, Mungo Bridge who is adept receiving and recycling passes from wide areas.

It would be naive to suggest Kesler is well versed in getting out of tight spaces on the pitch. Instead, we must applaud how he sets traps to engage opposition pressures and as this analysis goes on, we can identify that starting attacking phases from the right-back position was a common theme of Villa’s U18 games last season.

Even more impressively, Kesler can distribute and make use of his previous hard work. Offloading the ball can often be the pitfall for full-backs in academy football, but Kesler has shown he is more than capable of finding a pass, an accurate cross or even a shot from range.

This idea is explained here.

After dribbling past four opposing Portsmouth players, Kesler has the option to carry the ball even further or switch the play over to the left flank where Dominic Revan can take over this particular attack.

What we can identify here, is that Kesler’s game is more advanced than simply a rapid full-back with an eye for an assist. With a composure to match his technical skill set, in both dribbling and distribution aspects, Kesler is a modern full-back with the capability of covering a multitude of positions, from midfield to out wide.

Proficient in flipping midfielders by himself, we can infer that Kesler’s composure on the pitch is as another asset to a game that has drawn acclaim from Villa’s coaching staff, and certainly, this level maturity to take the game but the scruff of its neck from his isolated position is very promising.

Expanding on this point, in the next frames in a game against Southampton, Kesler’s ability to perform the modern full-back role is demonstrated. 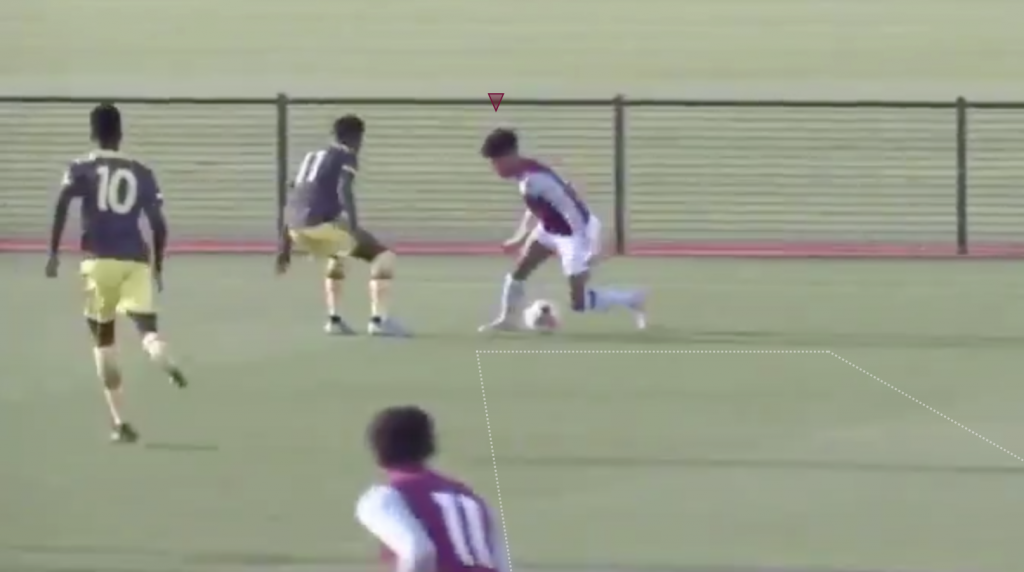 Standing up Southampton’s left winger, Kesler shifts the ball inside the pitch by using an advanced, technical skill, the ‘elastico’. Now, he’s no Ronaldinho yet, but if the 17-year-old is capable of beating his marker with the confidence needed to execute such a skill inside his own half, he can presumably beat a player with an assured swagger almost anywhere else on the pitch. 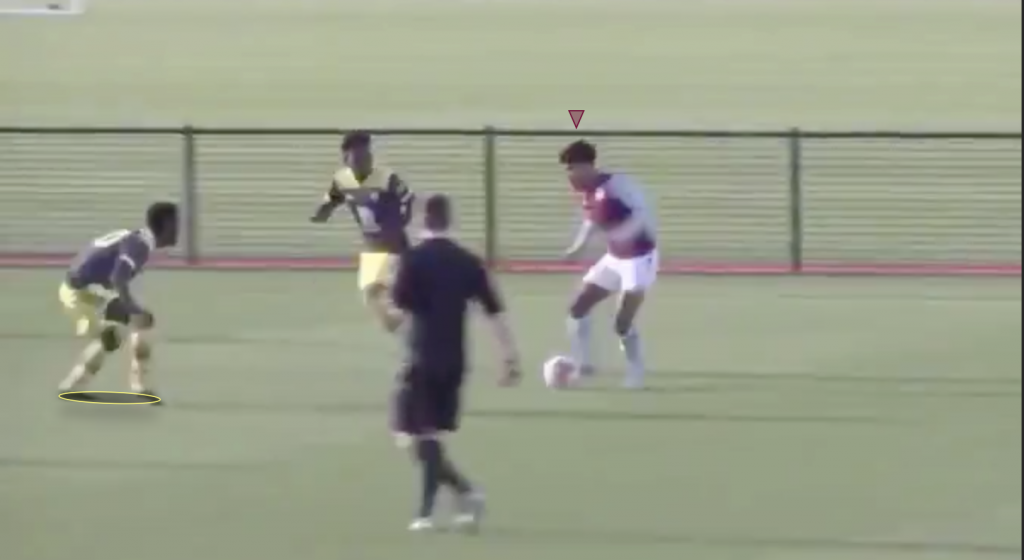 After taking two players out of the game, we see Kesler once more driving in-field, towards a familiar position where he likes to affect the game, more particularly in attacking sequences.

Later in the same passage of play, after moving beyond several defenders, Kesler finds himself only yards outside Southampton’s penalty box having brought Villa through the final third. 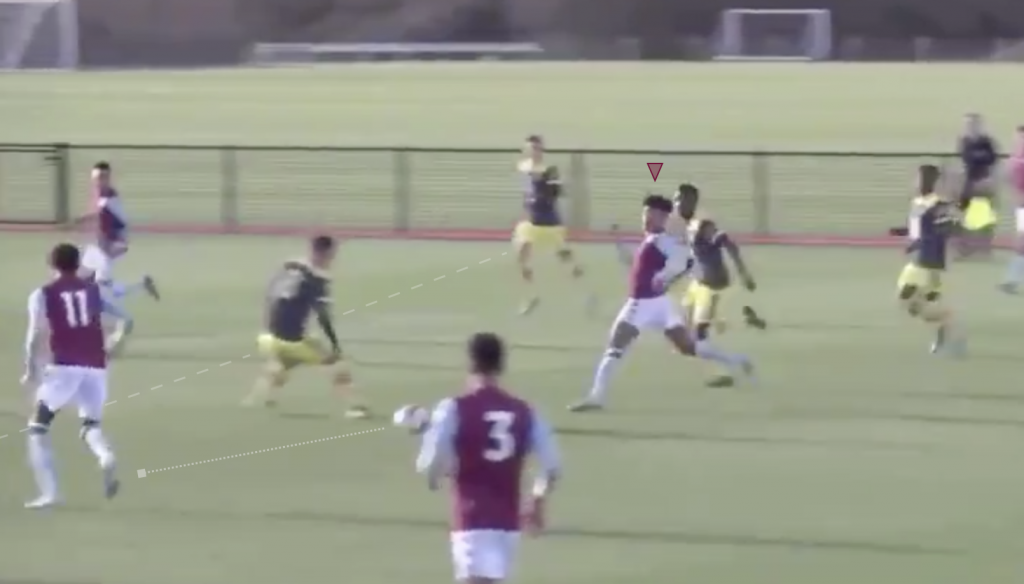 His exceptional ability to dominate the right flank will be crucial to Villa’s U23s attacking output next season. A full-back with the capacity to flip an opposition’s midfield after one passage of play that sees him explode through the thirds is an encouraging sign that Villa might have unearthed a full-back to call a first team star in years to come.
The composure to pick a pass despite being surrounded by several opposition midfielders means Villa can take players out the game with Kesler’s running ability with the ball at his feet. Entering the final third as instanced in the graphic here, Philogene-Bidace has a chance to shoot on goal after his teammates’ mazing run.

An offensively threatening modern-full back

Performing with an explosive speed that few defenders match, with an ability to carry the ball into threatening areas, Kesler has all the makings of an overlapping dream for teammates but also a real thorn in opposing defences.

His game is so developed that in fact, Kesler’s most effective area to cause damage to the opposition is within the central areas of the pitch, more so away from the flanks.

As highlighted below, and discussed through this analysis, Kesler likes to dribble inside the pitch after taking away opposing pressures whom he invited to wide areas, leaving space in the middle of the pitch.

This theme to his game is very hard to prevent, such is his ability to beat a player even with his back to goal. Explosive power and effective agility allows Kesler to break into a sprinting motion quicker than his marker, who is often a winger without the defensive capacity to nullify his unique threat at source.

Here, we can see how he advances further up the field in the same passage of play, against Swansea City U18s.

A brief opposition analysis will highlight Kesler’s knack of beating a press before striding in-field towards the opposition’s final third, but limiting his effect on Villa’s output going forward can be very testing. In defensive capacities – while the youngster has in fact been converted as a striker from his younger days in the Villa academy – Kesler will continue to develop and mature as he matches up against players up to seven years his senior in the U23 set-up.

Kesler couldn’t be in better hands as he makes the step up in academy football. Villa’s U23 head coach, Mark Delaney will oversee his progress next season, and while Kesler still has learning to do, there’s certainly a pathway for another one of Villa’s rising stars to make a name for himself in years to come.