In mid-august 2016, Aston Villa were in the midst of preparing for their first ever season outside of the Premier League, their first in the second division since relegation in the 1986/87 season.

The club had recently been acquired by Chinese billionaire and business tycoon, Dr. Tony Xia, who had himself just secured the services of a Champions League winning manager of only four years previous – Roberto Di Matteo.

Along with numerous changes in the boardroom came a complete upturn in the dressing room. Fourteen players that had been in the senior squad in the fated relegation season departed, whilst there were nine newcomers that entered the gates of bodymoor heath.

Amongst the flurry of summer signings, center-back Tommy Elphick was signed from Bournemouth for a fee of around £3 million and was given the captains armband ahead of veteran players such as Mile Jedinak, Gabby Agbonlahor, and Micah Richards.

Despite the promise of promotion to the Premier League from owner Xia, by the start of October, the club were win-less in nine and had only one win in eleven.

The Italian manger was promptly sacked and former blues boss Steve Bruce was implemented to fulfill the role.

Along with this managerial change came a change on the field too.

The new manager swapped the captaincy from one center-back, to the other.

James Chester, who had started ten of the eleven games under Di Matteo, was given the armband by Bruce in a move that would see the Welshman become a firm fan favorite for years to come. 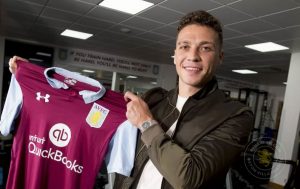 In the first seven games under Bruce’s management and Chester’s captaincy, the lions went on a seven-game unbeaten streak which saw them close in on the playoffs.

Despite the early signs of promotion potential, the B6 outfit later went on to lose seven from eight games between January and February – a stretch that ultimately cost the side any faint chance of an immediate route back to the promised land.

Despite it being a season to forget for the claret and blue faithful, Chester played every minute for the villans from the second match day onward. He led by example, spoke eloquently about the troubles the team were facing in media interviews, and aided the development of some of the younger players in the squad such as Jack Grealish and Andre Green.

Points wise, the most successful season in the second tier for Villa, Chester partnered up with former England captain John Terry in the heart of defense as the club aimed to win promotion at the second time of asking.

In a controversial move by the management however, Chester was stripped of the captain’s armband in preseason, for it to be given to the afore mentioned Terry.

However, in early November, Terry suffered a break of a bone in his foot which kept him sidelined until January.

Up stepped Chester who again was handed the armband midway through a season.

The former Hull city mans leadership helped the team to ten games and two losses in the spell he was at the helm on the pitch again.

Although, when Terry returned, captaincy was returned immediately back to him. Despite no longer being the recognized authority on the field of play, Chester remained a charismatic figure around the club as he helped Villa secure a playoff position – playing every minute of every league game that year.

In the playoffs, Villa beat Middlesbrough 1-0 on aggregate before losing by the same margin to Fulham in the final.

Once more, the ever-reliable Chester played every minute of all three games even if it wasn’t enough to see the team return to the topflight that year.

For the first time in his claret and blue career, Chester began the eventual promotion season as the recognised captain of the club.

Despite a managerial sacking early in the season once more, Chester retained his leadership role as Dean Smith began mounting an attack on the playoffs.

Yet again a mainstay in the team, Chester played every minute of every game in which he was eligible to play until the end of the January transfer window when a first-choice replacement centre back was signed.  In an announcement that saw Chester implemented into Villa folklore, it was announced that the recently turned 30-year-old had been playing the first half of the season with a knee injury that was becoming more and more debilitating each game (hence the replacement CB signing).

In fact, the defender came out after Villa’s promotion triumph stating that he would have to manage the injury “indefinitely” and that playing through the pain as he had done so, had put his career in jeopardy.

The true sacrifice that the stalwart defender made was crucial in allowing Villa to secure a top flight return as throughout the injury spell where he was still performing on the pitch, the squad didn’t have an operational player to cover the position. 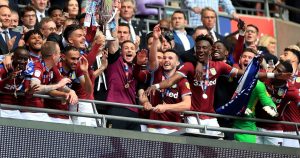 The true extent to the respect that Chester gained for his three-year heroics at Villa were on show for all too see when the new captain Jack Grealish asked Chester to lift the play off trophy alongside him.

A true recognition of the fact that Villa would simply not have been able to achieve their success had it not been for the defenders sacrifices throughout that season alone, but also for his monumental impact upon the Villa team in their trio of seasons venturing for promotion.

Unfortunately for Chester, (and all Villa fans), he was surplus to requirements in the first season back in the Premier League, making appearances in the early rounds of cup competitions only.

In January, he was loaned to Stoke City who were fighting relegation from the second tier. In 16 games for the potters, he started 13 as he helped the club avoid the drop.

This summer however, when his contract expired at Villa, Stoke signed the now 31-year-old after his impressive half season within their ranks.

A man so beloved by the Villa park crowd, his sacrifices and continuous hard work for the team will live long in the memory of Villa fans young and old.

Making well over a century of appearances in claret and blue, as someone once said, form is temporary, class is permanent.