It is amazing what difference a win can make for a football supporter. The last time I wrote a preview was just before the Crystal Palace victory and to say I had given up was an understatement. Now, we head too Everton this evening and still have an opportunity of survival — somehow.

Now, I still believe we need a lot of luck and desire to survive but the one thing that impressed me against Crystal Palace was the effort from the lads. They didn’t give up, even when the so called penalty decision on Jack Grealish went against us. Normally our heads would drop.

None of us want to see us get relegated but I am sure we can all accept it if we are simply not good enough. When we see players strolling around the pitch and they look like they don’t care — as a football fan, it is hard to watch. If we go down or hopefully survive, I want to see our Villa side fighting for every last ball. It is why Chris Wilder and his Sheffield United team have earned so much respect this season.

Tonight’s game against Everton is a weird one. Evertonians believe their team are already on their summer holiday’s and don’t have a lot to play for but I am not sure. I rate Carlos Ancelotti very highly and I find hit very hard to believe that he would allow Everton’s season just to fizzle out. I hope I am completely wrong and the game mirror’s that of the Crystal Palace victory but I wouldn’t be surprised to see a backlash following their no show performance in their defeat to Wolves last time out.

Apart from the obvious casualties, Villa will be without Kortney Hause who has a rib injury that he picked up in the warm-up on Sunday. Dean Smith has said it is unlikely that he will make the game.

Neil Taylor is also said to be struggling after he went off injured with a hamstring injury against Palace.

Smith said: “Two players come out of the squad and we’ll add another two back in.”

Everton boss Ancelotti has revealed that both Maston Holgate (shin) and Andre Gomes (ankle) will both be fit and available to play Villa.

The Toffee’s will be without Yerry Mina however who is struggling with a muscle injury. Fabian Delph (muscle), Jean-Philippe Gbamin (Achilles) and Cenk Tosun (anterior cruciate ligament) have also been ruled out.

Smith tends to stick with a winning side so I don’t envisage any changes apart from Matt Targett starting following Neil Taylors injury. 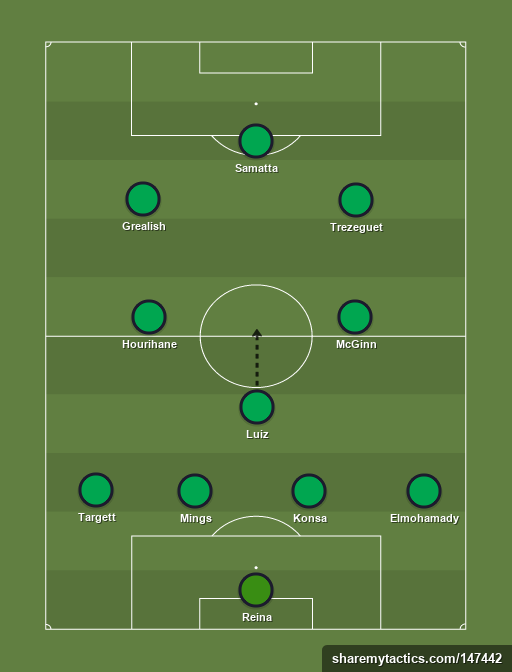 I have chosen the man of the moment this week, Trezeguet. It will be interesting to see if the Egyptian winger can build on his two goals against Crystal Palace on Sunday. The winger would set you back £5.1M on FPL and has 83 points to his name so far this season (The fourth highest in the Villa team).

My man to watch from Everton is Dominic Calvert-Lewin. I am a big fan of the young striker who has come on leaps and bounds since the arrival of Ancelotti. The striker has 122 points (second highest at Everton) and would set you back just £6.2M.

As I discussed earlier it is hard to know what Everton we are going to get and I do imagine it will be a more determined one that we witnessed against Wolves at the weekend. That said, this game will come down to who wants it more on the day. Villa have a lot more to play for so hopefully we can come out on top. Believe.