In the midst of Aston Villa’s Championship crisis, there was one man who stood taller than the rest, making permanent sacrifices to ensure the club’s eventual promotion back to the Premier League.

Averaging a clean sheet every three games whilst leading the club through it’s most perilous state, he broke the mould for signings carrying extra baggage, his attitude was faultless, in truth he went above and beyond the call of duty.

Aston Villa had accumulated just 17 points in the Premier League, and whilst relegation to the Championship for the first time in the club’s history became an eventuality after years of mismanagement, the relegation hangover was no less painful.

There was no shortage of calls for leaders, players with the knowhow and desire to play for the shirt from Villa fans tired of bemoaning lacklustre performances and half-hearted efforts for the club so used to competing in the upper echelons of English football. 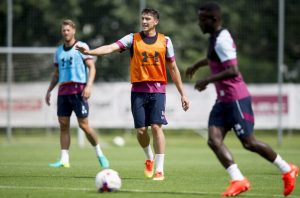 Ross McCormack, Tommy Elphick and Jonathan Kodjia were the select few to head Villa’s immediate promotion push but there, quietly going about his business, a former West Brom and Hull City defender more determined than anyone could have been to restore some pride back into Aston Villa.

James Chester is the man the Villa Park will forever welcome, the Rolls-Royce defender with the heart of a lion, worthy of holding the captain’s armband and sharing the Championship play-off trophy with club icon Jack Grealish.

His story is one deserved of his cult-hero status and after racking up 126 appearances in all competitions, he’ll leave the club with the best wishes of everyone attached to Villa.

After rubber-stamping his place in Villa’s first Championship squad in 2016, he would become insurmountable in every other Villa side leading up to promotion in 2019, until the very body he laid on the line for his team, packed in – his effect on the club was however never in question.

Chester won the 2018 Supporters’ Player of the Year award after a stellar campaign that had seen the Welshman partner John Terry for most of the league season. Keeping 20 clean sheets and scoring four goals during that time, Chester even filled the boots of the former Champions League and Premier League winner when Terry was sidelined for several months of the campaign. It wouldn’t be the last time Chester would deputise in Terry’s absence.

When the veteran left with his one-year contract up after Villa failed at their first attempt of navigating the Championship play-offs, the armband was passed down to Chester, who was only one of two players to play every minute of the 2017-18 Championship campaign.

Chester also played an integral role in guiding Wales to the semi-finals of the European Championship in that same year but after the arrival of Villa’s new billionaire owners Nassef Sawiris and Wes Edens, Chester’s injury problems would soon unravel.

Villa were out for a bargain on transfer deadline day with Scott McKenna reportedly of interest to Steve Bruce who had already secured the services of Axel Tuanzebe for another year. Though, as Chester led Villa out for the opening home game of the 2018-19 Championship season, centre-backs were in short demand.

He’d score the opening goal against Wigan in a game that Birkir Bjarnason would snatch all the points in the dying embers to make it a perfect start for Villa – two wins out of two for Bruce’s side and everything was looking rosy.

Problems would soon flower, and the Villa gaffer would be dug out the hot seat. Villa’s problems were more deep rooted than first feared when James Bree and Tuanzebe partnered one another at the heart of a make-shift defence at Millwall.

Villa went on to lose grip of the top-six and by the turn of the year, promotion was off the cards altogether. Newly appointed Dean Smith had barely got his feet under the table and already Villa were faltering come December when only a win over Ipswich would offer some rest bite in-between a run of nine games without a win.

“Ipswich at home was my last game and from the first minute to the 90th minute I didn’t enjoy it at all,” Chester recalled.

“I was just looking forward to the final whistle to be honest because of what I’d put my body through. I felt it was likely to have an effect on my performance and I was doing myself an injustice I think.

“The longer the time went on I feared that might h 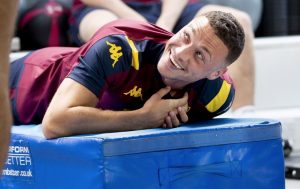 ave been my lasting memory of playing for this club but thankfully the last 10 or 11 months have all been worth it.”

Chester’s chronic knee problems began when he played for Wales against Denmark in November 2018. He continued to play for Villa while carrying the injury until late January when Tyrone Mings was finally drafted in as Chester’s replacement with recovery and rest was crucial for Villa’s injury stricken captain.

A heroic showing of dedication and playing through the pain barrier in the year the Villa won promotion back to the Premier League, Chester, whilst indefinitely injured from thereon, insisted he was proud to have played his extraordinary individual part.

“It has been a long three years to get this club to where it is now,” Chester said after securing promotion through the play-offs last year.

“I am proud of the achievement personally and what the lads have achieved today.

“It is certainly tough not playing. Any player will tell you that. If you are not involved, you feel like you are not part of things. You are having your own battles trying to get fit. I have been part of what this club has achieved and I am really proud of that.”

Risking his career for Aston Villa

Chester’s sacrifice for the cause couldn’t have been more selfless now his personal career is at jeopardy.

“I have damaged my body indefinitely, really,” he said last season.

“It is something I am going to have to manage for the rest of my career. It is what it is.

“I am a professional. Hopefully I can look after it as best I can and play for as long as possible.”

Villa boss Dean Smith revealed last year that Chester was training only twice a week in order to manage the knee injury that had dogged him for months leading up to the season’s ending at Wembley.

Chester was once more setback with injury as Villa embarked on their Premier League return, with a hamstring issue the reason for his limited game time until December last year. Albeit against a considerably weakened Liverpool side, Chester bowed out to the Villa Park faithful with a 5-0 win under the lights – the deserved send off for the player who risked his career for Aston Villa.

“It was very special,” said the former Villa club captain after walking off to a standing ovation.

“I love playing for this football club and there are a lot of games between now and the end of January so hopefully my performance has planted a seed and we’ll see where that takes us.” 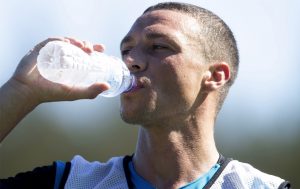 His final win in a claret and blue shirt set up a Carabao Cup semi-final against Leicester. Villa claimed a two-legged victory over the Foxes but eventually left empty-handed on a return to Wembley, nine-months on from Chester thrashing the Championship play-off trophy aloft.

James Chester might not have been the glitziest, most lavish footballer to grace the Villa Park turf but his whole-hearted, passionate demeanour is unmatched. Stretching every damaged muscle to clear the ball off the line against Bolton Wanderers on a murky Friday night, his voice would reverberate across the Villa Park’s four walls to the response of 40,000 Villans following their leader.

An integral part of Aston Villa’s modern history, Chester will be the man we will turn to should his sacrifices be remembered as the beginning of a rebuild back to the heights Villa fell from all those years ago.