Aston Villa met with their former manager Steve Bruce this evening when both sides had to settle for a share of the spoils in Newcastle this evening.

It was clear that changes needed to be made as Dean Smith replaced Conor Hourihane and Keinan Davis with Trezeguet and Mbwanna Sammatta as he changed his formation to a 4-2-3-1.

Villa started off bright at St James Park with a quicker tempo and looked far more attacking than we were in our 1-2 defeat to Chelsea on Sunday.

Trezeguet, making his first start since January, came close just after 10 minutes. Ezri Konsa raced down the right-wing and swung in a perfectly waited cross for the Egyptian. The winger could only watch on as he squandered a perfect opportunity over the bar.

A few moments later, Villa came close again, once again from the right. This time it was the Anwar El Ghazi who crossed the ball but Samatta could only head his ball wide of the post.

Despite dominating the chances in the first half, the hardest thing was not making it count, yet again. And not for the first time this season.

Subs have their say

Newcastle came back into the game in the second half as Villa were crying out for a change but once again it was too little too late from the Villa boss.

Andy Carroll and Dwight Gayle were introduced to the action and it didn’t take long for them to make an impact.

Carroll found Gayle in acres of space in the middle of the park, slotting past Orjan Nyland as Konsa was unable to close him down in time. Both Tyrone Mings and Kortney Hause were out of position, creating the space for the former West Brom striker as another mistake costs Villa.

Hourihane was a man on a mission as he sent in a free-kick in which Konsa should have done better but he could only watch on as another chance went by. Hause then comes close, once again heading wide, with Hourihane once again the provider. 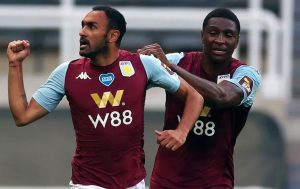 Third time lucky for the Irish International when he delivered a corner with seven minutes left on the cross. Egyptian Ahmed Elmohamady won the header and somehow the ball squeezed through Jonjo Shelvey and Newcastle goalkeeper Martin Dubravka.

Despite pushing for a winner, it just wasn’t to be as Villa will look back as another game that could and probably should have been all three points.

The harsh reality is that Villa are fast running out of time and form isn’t on their side. Two points from possible twenty-one are relegation form. Thirty-two of our last thirty-six goals have come inside the area. It all points to one thing.

I have said it since Southampton, I’ll be surprised if we win another game

32 from 36 goals scored in the box, press kills us

Worst defence in the league

Teams around have each other meaning points gained too #avfc

Players like El Ghazi and Trezeguet have been caught out this season. I don’t know what the future holds for either of them but at the moment, they are not Premier League quality.

But the positive side of it all, as Paul Merson stated on Sky Sports News is that Villa is still only a point from safety. One of those teams down there will need to pull off a shock result and whoever does that will have every opportunity of Premier League survival. Next up for Villa is Wolves which won’t be easy.