After Aston Villa secured their Premier League status on the final day of a season like no other, Andre Green was the fan who lost it when Jack Grealish scored the opener and the fan in despair when we almost threw it away at the London Stadium.

For he is one of us, a Villa fan at heart, with memories of fondness and hurt a plenty, the dream like so many others was to play at Villa Park having scaled the Trinity Road steps and queued at the burger van at 2:50pm on a Saturday afternoon.

Scoring a stunner at the Holte End, completing the improbable comeback in the dying embers against Sheffield United and lifting the Championship play-off trophy, Andre Green is leaving Aston Villa with unfinished business but the priceless memories that every Villa fan craves.

The club has no shortage of in-house Villans, from the skipper to manager, even new assistant coach Craig Shakespeare too. Losing a player who dreamt of playing for his boyhood club however, feels no less disheartening.

Alongside ten other youngsters including Callum O’Hare, Green was placed on Villa’s released list last season after a succession of loan spells proved futile to his defence of the Villa shirt he’d finally claimed as his own after a breakthrough year under Steve Bruce.

Green penned his first professional contract with Villa aged 17 after catching the eye in Villa’s u21 side as a 15-year-old. The quickly developing winger had been on Villa’s books from the age of nine before graduating through the academy.

He made the senior matchday XI for the first time as an unused substitute in Villa’s final Premier League match of the 2014-15 campaign against Burnley, only five years or so after watching his idol Ashley Young from the steep heights of Villa Park.

“I used to come with my cousin who is from Devon and we used to sit in the Upper Trinity,” Green told Birmingham Live.

“My favourite player to watch was Ashley Young, playing in the same position as me, because of the way he moved, the way he controlled the ball.”

Green netted his first goal of the season for the U18s in October 2015 – a fine solo effort to earn a 1-0 win over Fulham at Motspur Park, and from there he progressed through the academy to break into the senior side before the end of Villa’s dreadful 2015-16 relegation season.

Although Villa were resigned to relegation by the time Tottenham Hotspur came to Villa Park with eight Premier League games left to play, Green’s 20 minute cameo was a sign of things to come from the exciting youngster – Championship football was on the horizon and Villa fans were keen to see more of the player they’d later call ‘one of their own’.

“Villa park to me was the biggest stadium in my eyes of where I wanted to play,” Green said after making his debut.

“It was a crazy feeling, it was emotional too and for my family, because we always used to go there and sit up in the high tiers, then to be at pitch level waiting to come on, it was a massive experience and a proud moment, words can’t really describe the feelings that I felt. 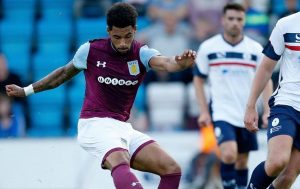 “Every time I stepped into the stadium what appealed to me was the fans, how big the club was and that’s the first thing that stood out to me, so Villa Park has been a massive, massive stadium to me.

“Villa park is home to me, I can’t imagine myself loving anywhere else as much as I do at Villa. That really is a part of my heart and I just love to step out in front of it every game.”

After making his second top-flight appearance at Swansea, Green played another half an hour for Villa’s first team, although after all, it was the U23 side that’d beat the seniors 3-0 at Bodymoor Heath that year.

It would turn out to be Green’s final top-flight appearance for Villa and if he hadn’t known it at the time, it’s a real shame a boyhood Villan wouldn’t get a second chance to represent the club in the Premier League having become a part of the squad who would later toil in the Championship for three seasons.

The high volume of player turnover and pure commotion at the club meant Green’s place in the side was up for grabs as every transfer window passed – Villa were buying frantically and youth players had to stake their claim.

Green’s dedication to drag Villa back into the top-flight was never questioned with season disrupting injuries a key theme after he properly broke into the first team ranks in 2017.

In fleeting spells, Villa’s ambitious winger showed promise, but at times also showed his inexperience, playing for the badge on his chest however was evident.

That goal at the Holte End

It took 23 senior appearances in all competitions for Green to score his first goal in senior football, and in some fashion, it’ll be the goal he’ll remember for the rest of his life.

“It was the best feeling I ever felt, it was like a dream come true to score in front of the Holte End.”

Running at Russell Martin as he entered the penalty area, Green used the Norwich centre-half as a mannequin to bend an unstoppable effort past Angus Gunn, sending Villa Park delirious and announcing himself to the club he calls home.

Villa were languishing in the Championship before Bruce threw in some youthful exuberance, with Green and Keinan Davis running riot against Daniel Farke’s Norwich side completely thrown off by Bruce’s willingness to give youth a chance.

“The way I scored it and to make my family proud, it was a proud moment for everyone and the best moment of my career so far.

“I could’ve cried that day, you can probably see from the celebration, it was definitely the best moment of my career and I’ve never felt a feeling like that.”

Villa went on to draw to Bristol City before failing to break down Dean Smith’s Brentford side who’d remain unbeaten against Villa over the course of a three year exile from the top-flight. 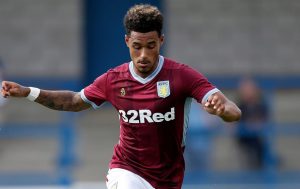 Green was replaced on the hour mark against the Bees with a hamstring injury halting his progress in the first team by several months. Green looked like the winger Villa were crying out for in the Championship, with Albert Adomah initially out of favour under Bruce at the start of his first full season.

Adomah would go on to finish the season with 15 goals whilst Robert Snodgrass would claim cult-hero status, but without being sidelined for the majority of the 2017-2018 season, who knows what heights Green could’ve reached with his early season promise exciting everyone at Villa Park.

In truth, Green realised his best form in a Villa shirt in the games leading up to an injury that would keep him out of the first team frame during a season that was pivotal to his development.

Following a loan move to Portsmouth, where he scored five goals on the south-coast, Green returned to Villa in January where new boss Dean Smith wanted to take a closer look at the player Villa were seemingly happy to let go at the start of the season.

Achieving big things at Villa was the aim

Green remained optimistic about achieving big things at the club he grew up supporting. After spending the first half of the season at Fratton Park, he mirrored Grealish’s crucial loan move to Notts County back in 2013-14.

Green told Villa TV: “That’s where I’m trying to be – where Jack Grealish is at the moment. That’s the plan.

“I can already feel the love from the Villa fans, but I want to be in that bracket of being an icon for the club – a legend. That’s what I aspire to be.

“Jack’s done great in his career so far. I remember when he was at Notts County at the age of 18. Back then, I wanted to be like him. Now I’ve done what he has and been out on loan, and I’m glad I did.”

Green insisted that he’d developed both as a footballer and a person during his time with Kenny Jackett at Portsmouth.

He added: “It was a weird one to begin with – the first time I’d been away from Villa in 15 years. Being away from home, it makes you feel lost. So it allowed me to grow up quite a lot.

“I’m happy I did it and I’m happy with the moments I created there. I really enjoyed the experience and now I can bring that back here.”

It wouldn’t take long for Green to rekindle a connection with the club he’d been playing for since nine years of age after scoring a crucial goal against Sheffield United en route to Villa’s ten-match winning run that’d propel Smith’s side into the promotion mix.

Villa were 3-0 down at Villa Park when Chris Wilder’s Blades cut the gap between the promotion places and 10th place – the lowly position Smith’s underperforming Villa side found themselves in. A dramatic final ten minutes that saw firstly Tyrone Mings then Tammy Abraham pull goals back for Villa, all before Green completed one of the most dramatic comebacks at Villa Park for some time.


“That might’ve been my best goal to be fair,” Green remembered.

“Considering the circumstances of the game, I can’t put it into words how that felt either, it was a crazy feeling but even though some of the fans left it felt very special to me.”

Green played his part in Villa’s record break run to the play-offs, and he owed his contribution to the Villa faithful.

“The moment I got back from my loan spell, the fans were chanting that ‘One of our Own’ song from the sidelines. From that moment, it set me up from then to where I am now. It was so good to come back to – it gave me that confidence.

“Whenever fans chant for you – especially at a stadium like Villa Park – it will fill you with belief.

“When the fans are behind us it just pushes the team as one, it’s like the 12th man like it says around the stadium, they really do influence the game and when they’re behind us it’s what every player needs to push us over the line.”

No doubt Green will be one of the many congregating on the stands of Villa Park in years to come, backing the boys in claret and blue. Whilst his playing days at Aston Villa may be over, his love affair with the club will last forever more and he’ll leave with all the best wishes of the club and fans alike, for he’s one of our own.

By: John Townley
Title: ‘One of our own’ Andre Green leaves Aston Villa with our best wishes
Sourced From: www.avillafan.com/32342/one-of-our-own-andre-green-leaves-aston-villa-with-our-best-wishes/?utm_source=rss&utm_medium=rss&utm_campaign=one-of-our-own-andre-green-leaves-aston-villa-with-our-best-wishes
Published Date: Tue, 18 Aug 2020 20:18:44 +0000