Kevin Phillips is adamant that Emiliano Martinez has been verbally guaranteed the number one jersey at Aston Villa even when Tom Heaton returns to full fitness.

The former Claret and Blue, speaking exclusively to Football Insider correspondent Dylan Childs, suggested that the 28-year-old would not have made the move to Villa Park unless he was given certain assurances over his position.

The club confirmed the signing of the Argentine shot-stopper after Football Insider revealed that a £17million plus add-ons bid had been accepted by the Gunners. 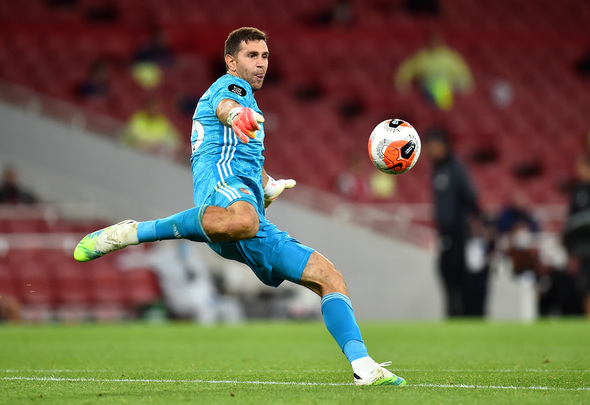 Martinez impressed between the sticks for Mikel Arteta’s side in 2020 in the absence of the injured Bernd Leno.

He started the Community Shield against Liverpool even though Leno had returned to full fitness with suggestions that he had earned himself the number one jersey at the Emirates.

When asked by Football Insider if he believes Martinez was given long-term assurances about his position at Villa, Phillips said:

“I would imagine if Martinez stayed at Arsenal and fought for his place he would have a very good chance of playing a lot of games. Something has been said to make him want to sign for Villa and the only thing for me that it could be is the guarantee that he is going to play week in, week out for the whole the season.

“Of course he will need to play well to stay in the team especially when you have a Tom Heaton breathing down your neck. He will have to stay on his toes.

“I am surprised but now Villa have got two fantastic goalkeepers competing for that one spot. That can only be good.”

Last season’s first-choice goalkeeper Tom Heaton is expected to return from a knee injury in a month.

Martinez is in line to make his debut for Dean Smith’s side against Sheffield United tomorrow night.