The home side were the first to have an attack, with Grealish laying the ball off for Conor Hourihane to attempt from outside of the box – but his shot was deflected wide for a corner.

Crystal Palace took the lead, or so they thought, in the 7th minute as a free-kick was whipped into the box and Sakho “headed” the ball into the net as Pepe Reina was blocked from the ball by Jordan Ayew. The Video Assistant Referee, Jon Moss – who awarded a penalty to Bruno Fernandes on Thursday evening, called it as a handball.

Jack Grealish looked in the mood and was putting in a strong performance on the left wing in the opening 20 minutes, with Villa managing to get a number of balls into the Palace box – but with no positive action on the end of them.

There was an altercation between Tyrone Mings and Wilfried Zaha following the drinks break after Ezri Konsa had shepharded the ball away from Zaha and the Ivory Coast international tripped Konsa. Mings and Zaha went head-to-head and in the ruckus Mahmadou Sakho got involved. All three players received yellow cards.

Samatta had a chance on the half-hour mark as Elmohamady fired an inch-perfect delivery into the box. The Tanzanian forward was in the perfect position, but his header wasn’t – and flew straight over the bar.

The 37th minute saw Aston Villa forced into another change, as Neil Taylor – who had been struggling to get around the field for a large period of the game, was replaced by Matt Targett.

Grealish forced Guaita into a strong save following another great ball in from Elmohamady, but the Spanish ‘keeper got down low to his right to parry the ball wide with seven-or-so minutes until half-time.

Christian Benteke could have come back to haunt Aston Villa with three minutes remaining, forcing Pepe Reina into a vital stop before the ball fell back to the Belgian’s feet, with Reina collecting his second attempt too. A minute later, and Reina stopped another attempt from Wilfried Zaha.

Five minutes were added at end of the half, with Jack Grealish fouled in the third.

Hourihane stepped up for the free-kick, whipping a cross in that was headed towards the back post by Palace’s Joel Ward – where Trezeguet was waiting to pounce. The Egyptian slotted past Guaita and Villa lead at half-time. 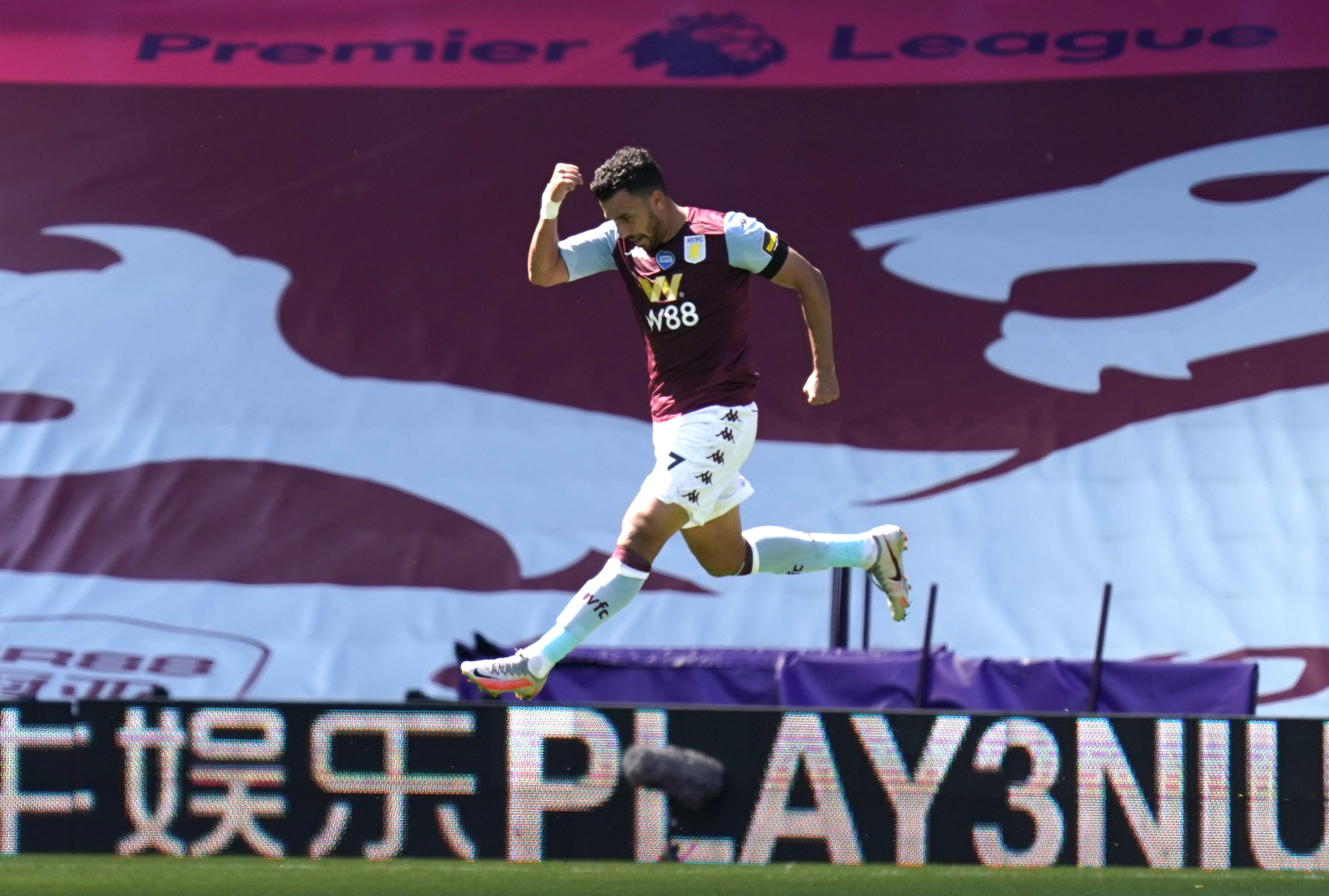 Crystal Palace made a change at the start of the second half, with James McCarthy replacing James McCarthur in the centre of the field.

Aston Villa had a shout for a penalty in the 47th minute as Grealish broke into the box and it looked like Van Aanholt had stamped on Jack Grealish as the Villa captain dropped to the floor. The Video Assistant Referee viewed the contact between the two players before deciding not to award the penalty.

Cheikhou Kouyate was booked in the 53rd minute for a lunging tackle on Douglas Luiz.

In the 58th minute, Trezueguet picked up his second goal as Villa broke on the counter. As Palace cleared the ball out, Hourihane headed it back into Trezeguet, who was just on-side, for the Egyptian to poke past Guaita.

Four minutes later and Hourihane fired from outside of the box with his favoured left, forcing Guaita into an uncomfortable save wide for a corner. In the next two minutes, Aston Villa had shouts for another penalty as Samatta flicked the ball into the arm of a Palace defender – but VAR said no.

Palace made two changes following – replacing Kouyate and Ayew with Townsend and Riedewald. Milivojevic was booked shortly after for a foul on Jack Grealish.

With sixteen minutes of normal time remaining, Palace made another sub – replacing Milivojevic with Maximilian Meyer. Directly after, Palace had their first shot on target of the second half with Van Aanholt firing towards goal – but Pepe Reina stood firm and saved well.

In the 80th minute, Conor Hourihane and Mbwana Samatta were replaced by Keinan Davis and Marvelous Nakamba.

There was a chance for Trezeguet to pick up his hat-trick as Targett passed a ball into the six-yard box, but the Egyptian couldn’t get a foot on the ball – and in doing so seemed to put off Keinan Davis who was racing in behind him.

The hero of the hour – or full 90 – was replaced by Anwar El Ghazi with a few minutes remaining of normal time.

There were five minutes added on at the end of the game.

Douglas Luiz was booked in the 91st for a foul on Zaha – with his persistent technical fouls fresh in the memory.

Palace pushed and pushed, but nothing came for the Eagles. Christian Benteke was given a red card as the game ended, for a persistent attempt to get at Konsa after they butted-heads during the game.

Aston Villa are now the first team in Premier League history to have won on every day of the week, have registered a clean sheet and picked up three points.