The majority of Villa fans threw in the towel last night when Troy Deeney scored the winner for Watford against Newcastle last night. I was one of those Villa fans, just read how defeatist I was in my match preview for the game against Crystal Palace today. It is amazing what a win and three points can do for your belief.

Villa boss Dean Smith has always maintained that we needed to get Liverpool and Manchester United out the way and then we go into the final four games of the season believing we can win games. It is only one game but we have 100% record with three games to go from what Smith said.

Smith was forced to bring in Ahmed Elmohammady at the last minute as Kortney Hause pulled out of the game through injury. Conor Hourihane came in for Anwar El Ghazi as he dropped to the bench.

Once again, just like in the defeat to Man Utd, Villa were fast out the traps, a team on a mission. But the game was never far away from another controversial VAR decision.

Palace were awarded a free kick which I felt was harsh as Jack Grealish appeared to win the ball. Nevertheless Luka Milivojevic swung in the resulting free-kick as Mamadou Sakho converted with the Villa back line at sea.

However, VAR ruled the ball had struck the Palace defender’s arm and was ruled out. Ironically it was Jon Moss, the referee who gave a controversial penalty to Man Utd in mid week. I must admit, I felt it was harsh as lady luck shone down on Smith’s men.

Elmo on a mission

Villa, always looked in control all day and may wonder how they only scored two. Going forward, everything seemed to come through Elmohamady and his ability to whip over an early cross.

The first one come on the half-hour mark when Elmohamady sent over an inviting cross but Mbwana Samatta wasted a great chance as he headed the ball over the bar. A few minutes later, another cross from the Egyptian landed at the feet of Grealish who caught the ball on the volley but was denied by Palace’s keeper, Vicente Guaita. 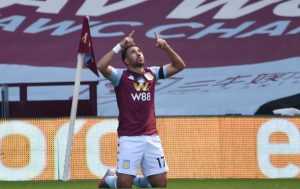 The home side eventually took the lead just before half time. Grealish was brought down by Cheikhou Kouyate and Villa were awarded a free-kick on the left of the box. Hourihane stepped up to swing in a beautiful cross, Joel Ward’s clearance attempt saw the ball fall to Trezeguet who slotted home.

From strength to strength

Villa emerged in the second half and were going from strength to strength as they continued to put Palace under pressure.

The home side were awarded a penalty when Grealish was judged to have been brought down by Patrick Van Aanholt. VAR correctly overturned the decision as it appeared that Grealish actually stood on Van Aaanholt’s foot. Been here before haven’t we? But I am sure on that occasion it was ruled in the favour of Bruno Fernandes and Man Utd.

Villa didn’t allow the decision to affect them as Hourihane was denied from another set piece when Guaita turned his effort around the bar.

Palace escaped from the resulting corner when Ezri Konsa’s effort was somehow kept out by Guaita but their luck finally run out when the ball fell to Hourihane who nodded the ball down for Trezeguet to double Villa’s lead.

Trezeguet should have sealed his hat-trick but failed to connect with Matt Targett’s cross late on. Former Villa striker Christian Benteke was sent off after the final whistle with rumour suggesting he kicked out at Konsa.