It’s an unfamiliar position for every Aston Villa fan as a Sunday shoot-out for Premier league survival looms with Villa installed as favourites to beat the drop after leapfrogging managerless Watford on Tuesday night.

To a man, Dean Smith’s Villa side played with both confidence and courage to secure their ninth win of the season through a single Trezeguet goal that might just prove to be the most important since John McGinn’s Wembley winner almost 12 months ago.

Villa never do it the easy way and after conceding an equaliser at Goodison Park, two wins from the final two was the requirement for top-flight survival – Villa are now halfway there.

A weekend that included Watford sacking Nigel Pearson and Bournemouth losing to Southampton after a late VAR decision, Villa knew they had to make use of a newly discovered momentum that since a crucial win over Crystal Palace, fans and players alike were believing again.

Smith has maintained that since the Premier League resumed, he and club officials were pleased with the team’s application and even results despite lacking a win in six games during that time. Focussing on the defensive fragilities Villa have suffered from and the set-piece situations Villa have simply squandered on too many occasions this term, Smith and his coaching team have finally seen a result for their hard work away from matchdays.
Arsenal hadn’t lost at Villa Park since the turn of the millennium but whilst Villa were more hungry than ever to secure three vital points, the Gunners have now lost 10 league matches for a third consecutive season for the first time since 1988.

Galvanised and focused from Goodison disappointment to last night’s final whistle, Jack Grealish knew that if this was to be his final game at Villa Park – the very stadium he used to watch his Villa hero’s – he’d have to drag Villa through the mire to claim possibly the biggest win of all this season.

Grealish a leader among men

Gliding past yellow shirts on the left flank, kicked from pillar to post and picking the lock of an Arsenal defence boosted by recent wins over Liverpool and Manchester City, Grealish, as if it needs saying, was instrumental to Villa’s success on the night when Premier League safety became a real possibility. 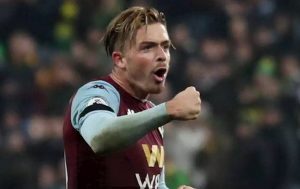 Four minutes of added time was allotted and whilst Pierre-Emerick Aubameyang, Alexandre Lacazette and Eddie Nketiah couldn’t manage a single shot on target all game. Fans were peering over the sofa even if John McGinn was almost walking backwards when leaving the field of play – it’s safe to say now, Villa were comfortable throughout.

Every side who survives relegation having been installed as favourites to go down before the penultimate game of the season not only needs a leader, but the quality and determination to carve out a run of form effective enough to protect their Premier League status having endured a campaign of heartache and bitter weekends.

Now Villa have the opportunity to make this Sunday the best summer’s weekend since last year’s play-off victory, and whilst travelling to the London Stadium won’t be a winner takes all contest, the ultimate prize is just as important for Villa.

Seemingly down after a 3-0 loss to Manchester United ten days ago, Villa fans were scanning the lower leagues for the next Robert Snodgrass, Albert Adomah or Lewis Grabban, but what a difference a win makes. Trezeguet’s goals against Palace and well-taken finish against Arsenal has put Villa in a commanding position to stay up this season.

Trezeguet’s goals are making the difference

According to reports, Trezeguet and his agent are plotting a move away from the club, whether relegation or survival is achieved, but his enthusiasm and hard-work is for all to see. Even more so, the three goals he’s scored in Villa’s past two home games have been crucial.

Forming a relationship in claret and blue down the right side with Egyptian compatriot Ahmed Elmohamady, Trezeguet has nudged Anwar El-Ghazi out of the starting eleven and barring injury, he’ll be starting against West Ham only a few weeks after being scapegoated by Villans so desperate to see some goals.

For the first time in 25 years, no Villa forward or midfielder had scored a single goal after nine consecutive Premier League games before Palace visited Villa Park last week, and with Ally Mbwana Samatta enduring his longest goal drought in two years and Davis without a top-flight goal all-together, Trez has stepped up to the plate.

Offered the chance of survival going into the last game of the season and anyone concerned with Villa would have snapped your hands off considering the lowly predicament the club found themselves in throughout some harsh winter months in which only a late goal against Watford proved to be the highlight amongst a run of ten games which produced two points in draws to Sheffield United and Newcastle.

And so the London Stadium awaits, the very arena that this group of Villa players can leave a lasting memory on Villa fans eager to see the club embark on their ascent back to the top.